libstatgrab is a library that provides cross platform access to statistics about the system on which it’s run. It’s written in C and presents a selection of useful interfaces which can be used to access key system statistics. The current list of statistics includes CPU usage, memory utilisation, disk usage, process counts, network traffic, disk I/O, and more.

The current list of supported and tested platforms includes FreeBSD, Linux, NetBSD, OpenBSD, Solaris, DragonFly BSD, HP-UX and AIX. We are always happy to accept patches to extend support to other operating systems.

The package also includes a couple of useful tools. The first, saidar, provides a curses-based interface to viewing the current state of the system. The second, statgrab, gives a sysctl-style interface to the statistics gathered by libstatgrab. This extends the use of libstatgrab to people writing scripts or anything else that can’t easily make C function calls. Included with statgrab is a script to generate an MRTG configuration file to use statgrab.

This release includes minor bugfixes and is API and ABI compatible with 0.92.

All versions of libstatgrab can be downloaded from GitHub. Downloads are signed using our key (download here):

For installation instructions see the README file contained within the archive.

If you found a bug or an issue with libstatgrab then you can report it on the project’s GitHub issues page. If you have a fix you can make a pull request there too. Bugs with a detailed description or a fix are likely to be committed sooner.

Here are links to bindings for higher level languages that provide access to libstatgrab. If you’ve written a binding for another language, please get in touch so we can add a link here.

These are various pre-packaged versions of libstatgrab that you can get for your favourite operating system. If we’ve missed any out, please let us know.

We’ve noticed that Google throws up some RPMs relating to Mandrake and Suse, but no webpage for them.

We also have an overview page for the library:

Then we have the manual pages for each function: 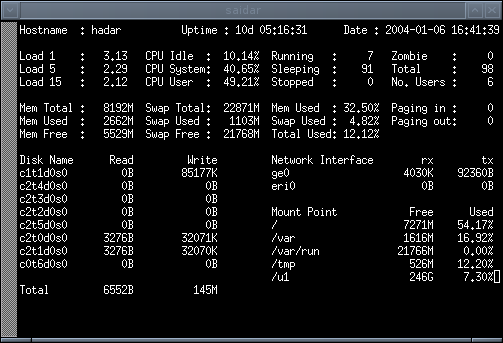